Embassador: You Know Me Well

Neon lights, spelling out well-known rap lyrics, mounted on colorful collages, bubbling over with pop culture references: That is the art of You Know Me Well, the second guest of our ongoing Embassador series.

We met the artist in his small studio in Berlin Mitte to talk art and hip hop culture, learn about his background as a (retired) DJ and graphic designer and mount some neons on canvas. This is You Know Me Well.

Originally from a small village in Southern Germany, artist You Know Me Well, after some eventful years in Shanghai, is now residing in Berlin with his two kids and his wife. YKMW who, in everyday life goes by Kami (another alter ego from his eventful past) welcomed us into his small studio space in Mitte. He’s busy finishing a piece that has already sold to a high profile customer from the German hip hop landscape that, as Kami lets us know, should remain unnamed. Oh well.

We start to take the first photos for this feature and get to talking. It quickly becomes clear that, for Kami, it has been quite the process to grasp and accept his new life as a full-time artist, even though his work has been getting a lot of recognition pretty much from the get go.

What makes his style so special are his bright and colorful collages, packed to the gunnels with all sorts of pop culture references, and neon light fonts mounted on them. From vintage video game characters to obvious rap references to dingy soft porn visuals; as You Know Me Well, Kami created a style that draws inspiration from everywhere, and, through that, is heavily influenced by hip hop culture. Which doesn’t come as too much of a surprise, with a background like his. It turns out that the artist busied himself with other art forms for years before getting into what he’s doing today. But originally, all of this starts when a new style of music enters his life. 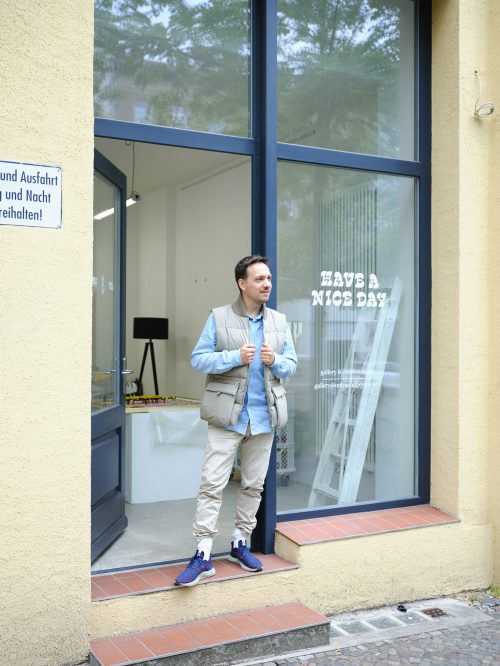 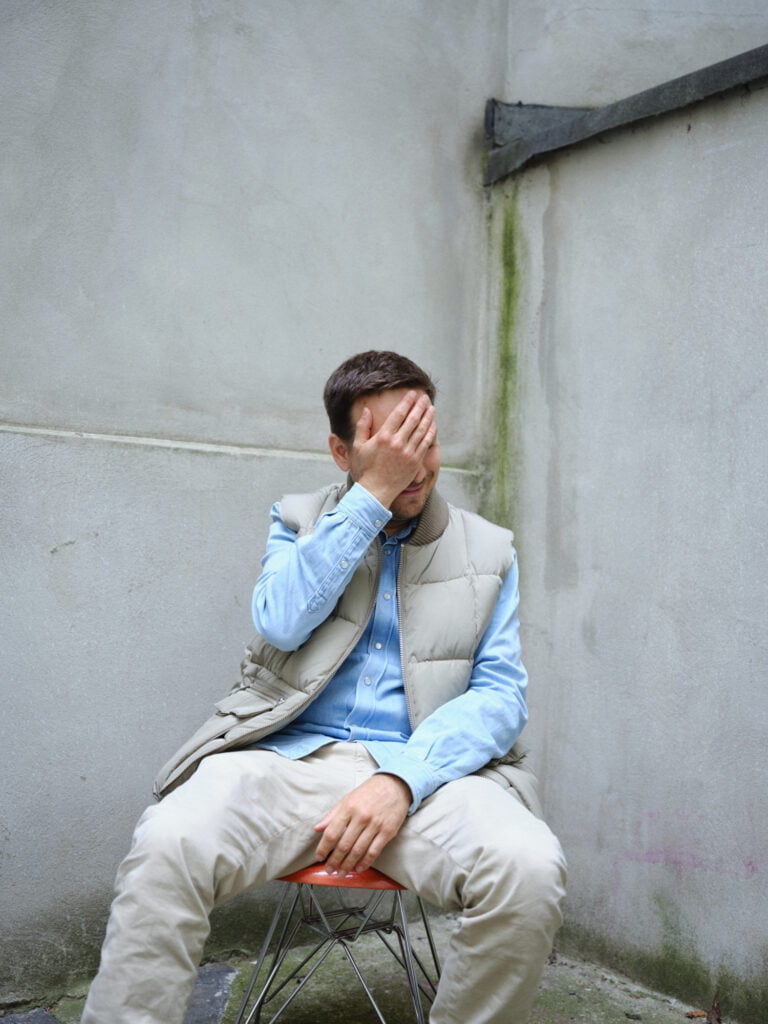 “Like a lot of other Germans, Hip Hop was brought into my life by older siblings, cousins and random older kids I met at the skatepark or the local basketball court”, YKMW remembers. “I must have been 10 or 11 years old.” Shortly after, in 1993, a documentary on German national television about Hip Hop culture in Germany and it’s origins in the US struck a nerve with young Kami. And just a few years later, he started dabbling in music himself.

“I never planned to become a DJ,” he recalls. “Collecting records was my passion and by the time I was 16, I had a decent record collection with a mixer and a turntable. When I got my hands on a new Stretch Armstrong mixtape, I recognized two songs which were blended together – “Usual Suspect” by Big Noyd and “1nce Again” by A Tribe Called Quest. I owned both vinyls, so I recorded the first song on tape and played around with the second one on my shabby turntable until I was able to beat match both. This was big and for days, I would listen to those two songs mixed together.”

“I didn’t realize it at the time, but this was a very bold move.”

Fast forward a couple years. In his early 20s, You Know Me Well was putting out mixtapes and playing gigs under the name of DJ Kamikaze, but to “become more relevant, it would have been smart to work with a rapper or a crew” — both of which he didn’t do, he tells us, shrugging.

Then, in 2003, Kami put out a mixtape called “Radiotuning”. With this tape, Kami wasn’t trying to “keep it real”, but instead had fun, mashing up commercially successful 90s smash hits with the emerging street rap of the era. “At the time, I didn’t realize this was a very bold move,” Kami tells us. “I lost quite a couple of Hip Hop heads, but this mix opened other doors and introduced me to a new crowd. Skateboarding- and snowboarding events, fashion and club gigs and most importantly, international arrangements, which was rather unusual for a German Hip Hop DJ back then.”

“Just to be clear, I didn’t invent mash ups or cross format DJing, but probably was one of the first to do it in Germany and then export it quite successfully, too. The same year I traveled through Asia, handing out CDs. One thing led to another and shortly after, I was moving to Shanghai to start a Friday residency in a downtown club.”

Not the original “Radiotuning”, but another eclectic early DJ Kamikaze mix from over ten years ago.

But life as a DJ turned out to be not enough. “I was soon becoming bored, so I started to organize events and parties. But I needed help with my artworks. Luckily, I met an incredible Art Director called Nico Yang – a close friend still.” YKMW and Nico stroke a deal: “He would help with design work in exchange for DJ lessons. While installing a Photoshop crack he said this remarkable thing that stuck with me: ‘You have to decide if you want to be a designer or an artist — that’s a huge difference.’ And that’s so true, even though I didn’t fully understand the scope at the time.”

Instead of looking at himself as the artist he would later become, YKMW learned the trade of a graphic designer and turned his DJ friends into design clients. “I kept busy creating artwork for albums, festival posters and club flyers.”

Even though Kami didn’t know it at the time, but especially the club flyer aesthetic should become another cornerstone for the work he does as an artist today. Looking at his work, it’s impossible to miss how the art of sampling that hip hop taught him is engrained in everything he does. It was in the flyers, it still is on canvas today. It seems to be the very beginning of every thought process for him, really, like it’s second nature. Then the DJ in him can’t stay away from the idea of the mash up, as he’s consistently mixing influences that originally didn’t go together, creating a new layer of meaning in the process, a meta-understanding of the pop culture he references. Just look at the way he combines a famous Ol’ Dirty Bastard quote (in neon letters) with a collage of black and white manga cutouts, or how he mounts a “Drunk in Love” neon sign over a mixup of Emanuelle-artwork, bringing together the grandeur of Queen B with a resurfacing adolescent fascination for 90s German late night television (can you feel it in your groin?). 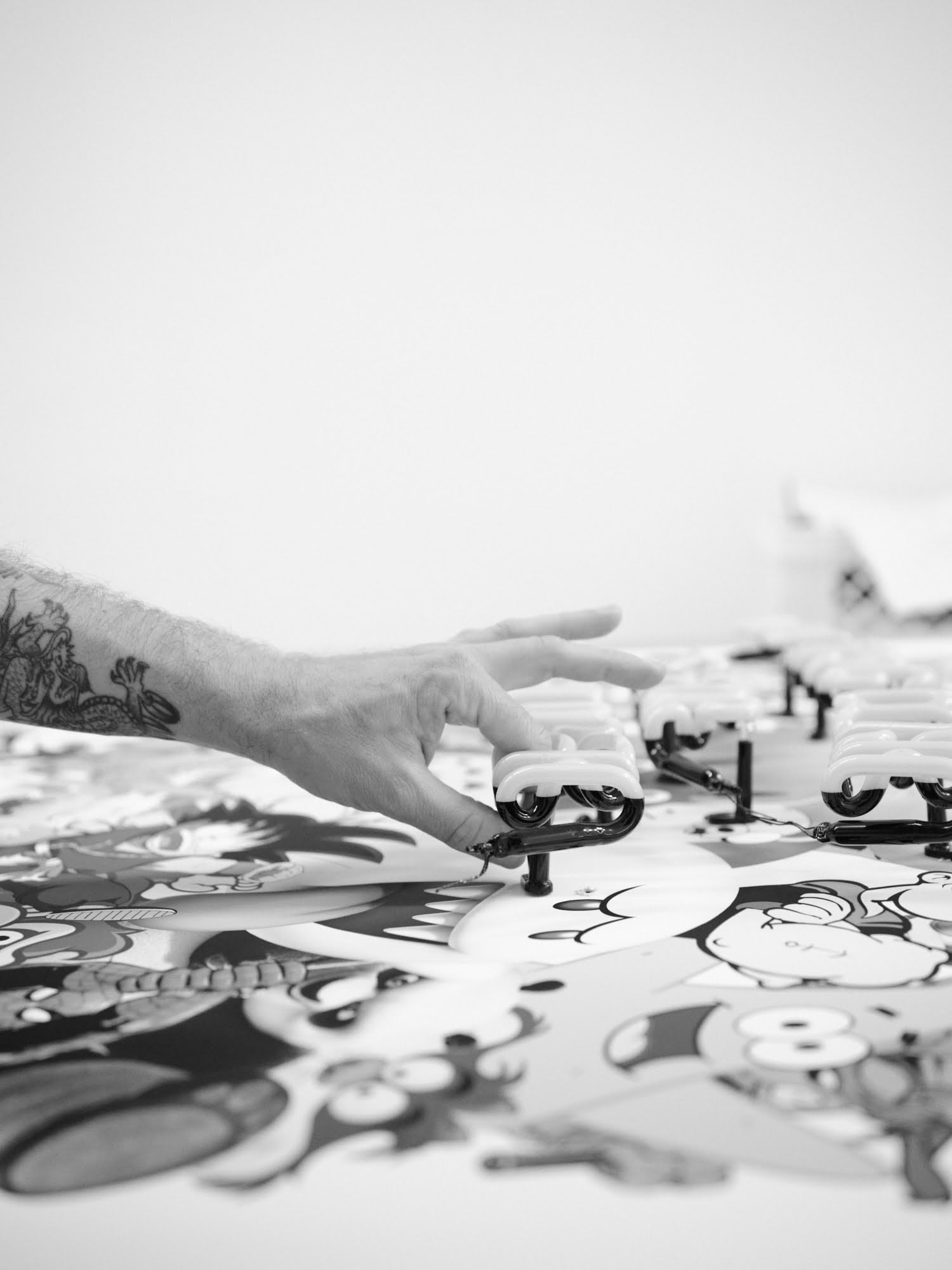 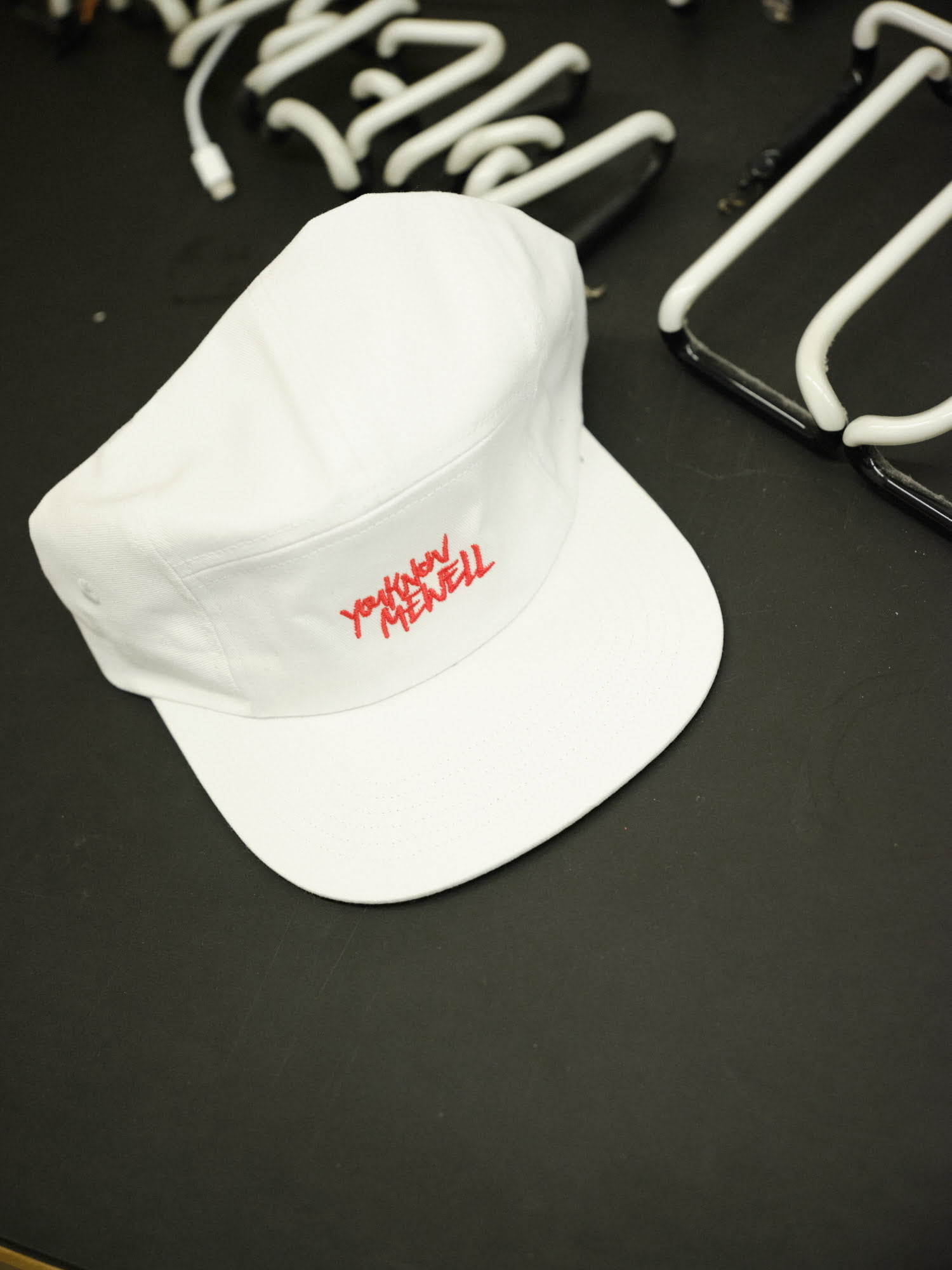 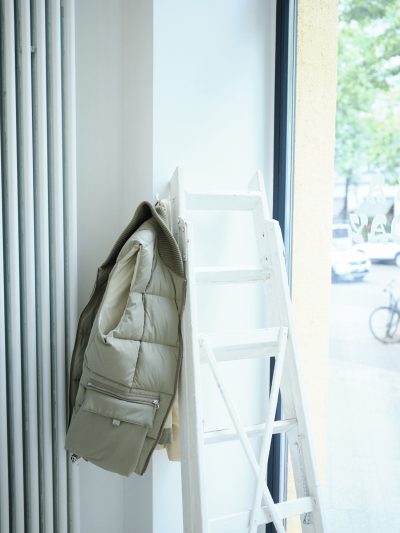 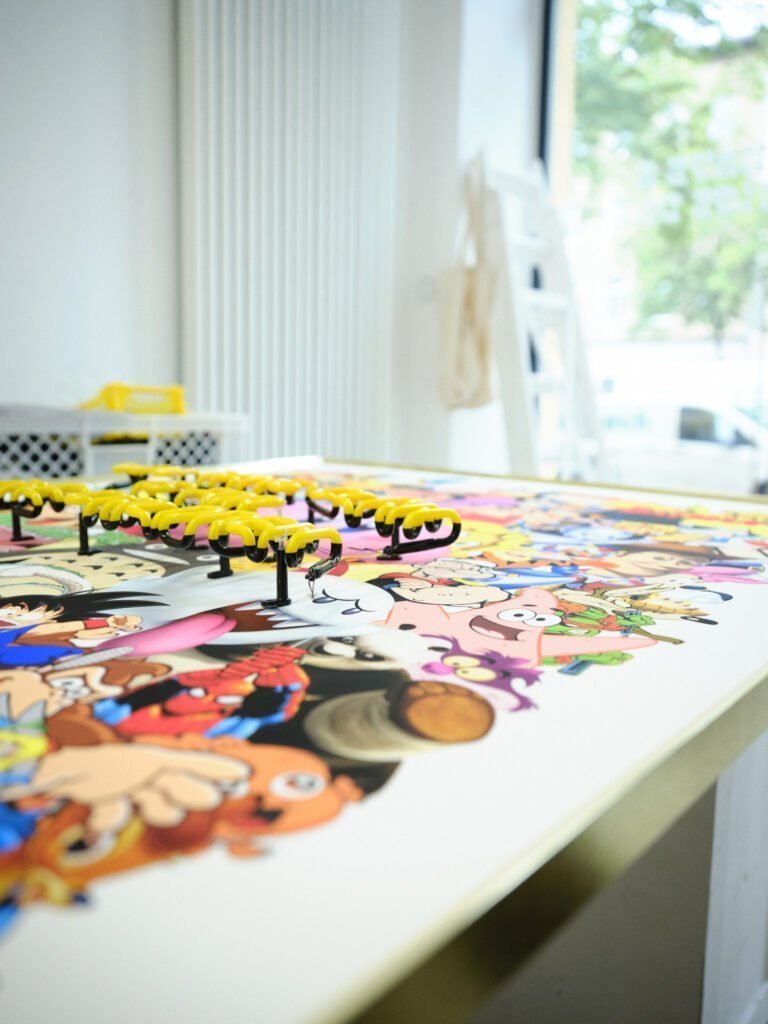 “I had a decent job, but couldn’t stop daydreaming.”

It was quite a journey from what he calls a “digital handyman” (“graphic designers take themselves way too serious”) to the artist he is now. “I was stuck being a ‘client-designer’ and simply wanted a creative outlet for myself. It took me over a year, if not longer, to realize what I was really doing, that I would have to shift my self understanding – from designer to artist.”

“At one point, I ran out of money and with two kids and my wife on parental leave pay roll, it felt like a no-brainer when I was offered a decent position as creative lead in full time. Everyone in the company was super nice to me, but I wasn’t able to concentrate on ‘their’ tasks. I was daydreaming all the time, imagining what I would be doing if only I could be in my studio instead of the office. So I resigned — two weeks before Corona lockdown,” YKMW laughs. “But I had done my homework, taught myself how to self-promote on social media and had a new website ready before going back into the studio.” 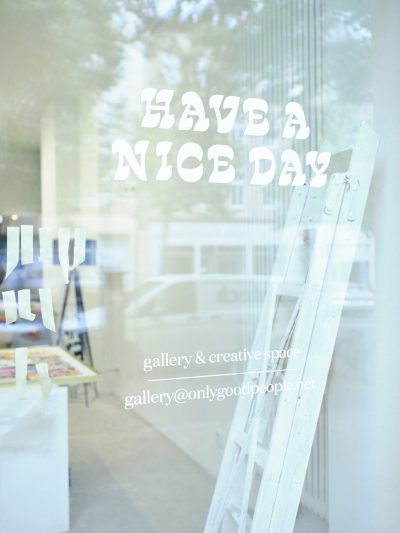 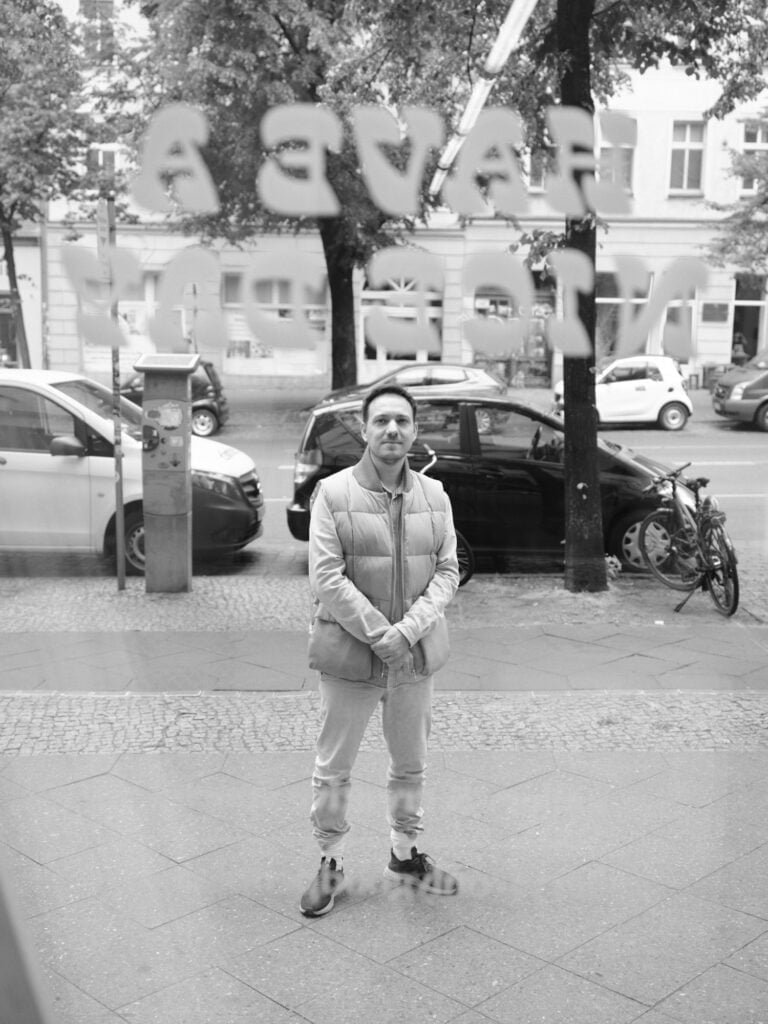 So Kami entered into full blown artistry in an unstable time, but not only, against all odds, is business seemingly going quite good, Corona brought other insights with it for Kami, as well.

“I have been a vegetarian for a long time and when eating at home, I’m fully vegan. I don’t own a car and for a long time, I thought that’s enough to balance out my negative footprint if there even was any. But the Corona crisis showed me that with modern technology, it is absolutely possible to plan ahead more, work with local resources mostly, and without me flying everywhere to get work done. There’s always room to improve and re-consider the way you do things. It’s just important to not get stuck and keep an open mind, always — in business and in personal life. I want to work on that and become even more cautious with my work flow in the future.”

“I thought being a vegetarian and not owning a car was enough. But there’s always room to improve.”

So what’s next for You Know Me Well, aka Kami, aka Kami West, formerly known as DJ Kamikaze? “I think I’m still scratching the surface of what’s possible for me as an artist, but I’m eager to develop and get better. Corona and the lockdown took out some of the speed for my projects. Last year, I had back-to-back shows in Bejing, Shenzen, Los Angeles and Zurich, and originally, I had planned to keep going with projects in Porto, Hong Kong and Ohio early 2020. Most of that got canceled, but that’s okay. I have a cool product and a well-thought-out supply chain. I understand my audience and I’m able to create art that I sign off on as “dope” but that also has a market. So I’m okay with going independent for now, all the more opportunities to co-op with other creatives and make more art.

So for now, I’m just working out of my Berlin studio, welcoming visitors here. I’ll keep trying to beat the Instagram algorithm and eventually want to release a limited t-shirt line, soon. If you know any fair producers who know their stuff, hit me up.”

Will do, Kami. Thank you for your time! 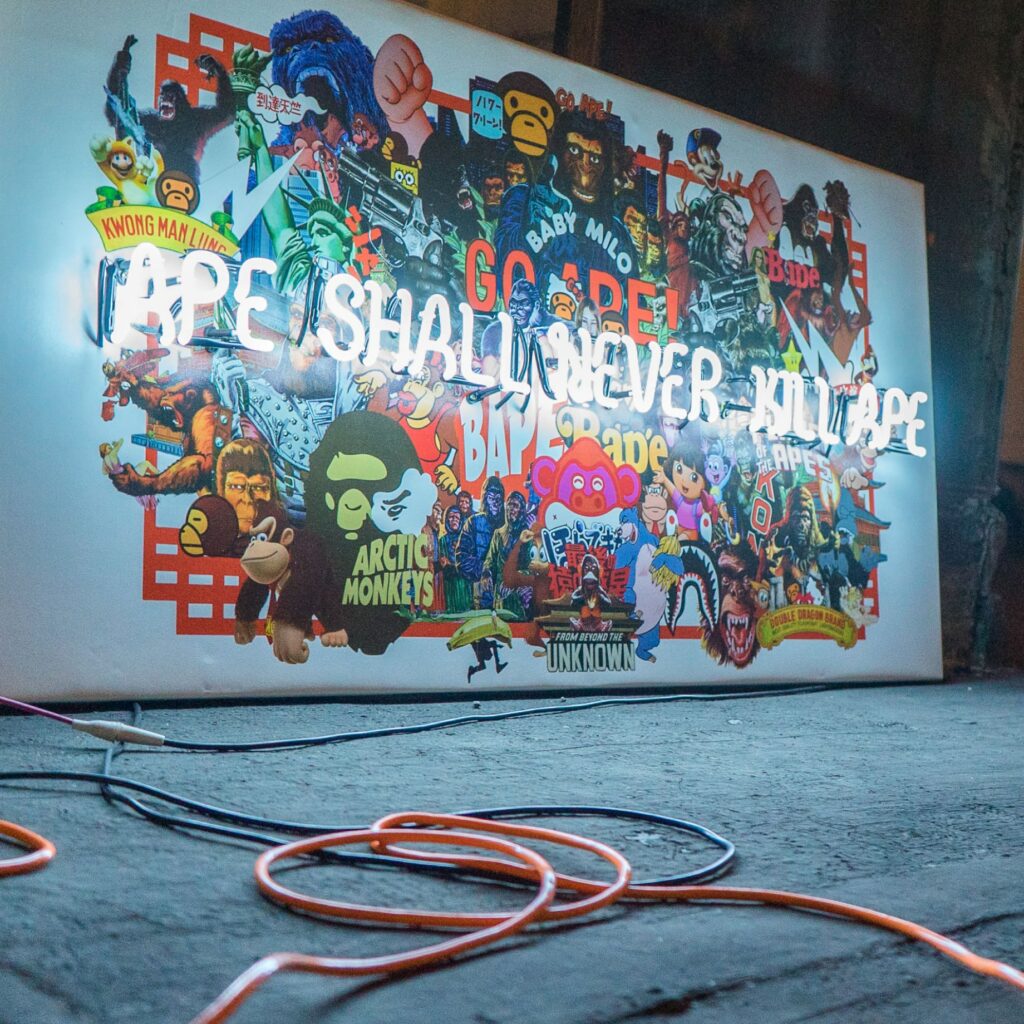 Find out more about You Know Me Well:

As Head of Brand for Embassy of Bricks and Logs, Eric Mirbach is in charge of all marketing efforts…
which includes all things ’sustainability’ here at the Embassy HQ.

Embassy of Bricks and Logs